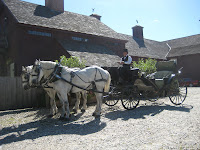 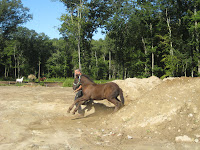 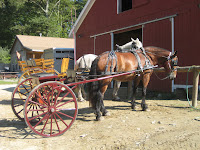 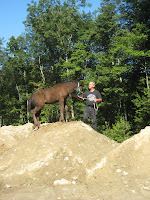 A busy weekend, again. Friday had us on a particularly long job in Pomfret, at the Sharp Hill Winery for an anniversary ride. (Sharp Hill is actually a stunning place, and the food and wine comes very highly recommended!) Saturday was spent working with Leila, working Danny, and preparing for the Woodstock Draft Horse Show on Sunday. (More on Sunday's horse show in a future post).
Leila is coming along beautifully. She is learning how to trust and go where we ask her. She is experiencing being away from mom, and enjoying it. Saturday's lessons included "hill climbing", and seeing new horizons without momma there. The importance of this kind of training is to prepare the horse for trusting it's handler in all sorts of situations and in all landscapes, with or without another horse present - of the utmost importance to the working or commercial horse. Soon, we will harness Dolly and tie Leila to the collar, and teach Leila to "work" in a team.
Photos: Top: The facility at Sharp Hill Winery is just stunning.
Second Photo: Leila rushing down a dirt pile (the bottom picture shows her standing at the top).
Third Photo: Friend Linda's Percheron, Cyrus (once ours!) stands at the hitching rail next to Danny after a nice afternoon of cart rides.
Posted by Cedar Knoll Farm 1 comment: 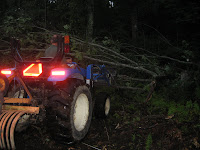 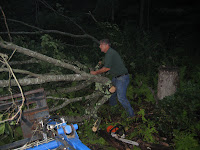 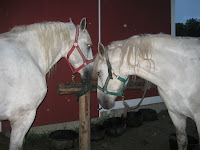 Monday was an especially windy, rainy day, and while we were busy with visitors to the farm in the late afternoon, a very large tree came down in the back pasture. We had neither heard this nor saw it happen, but while in the house preparing supper, I looked out the kitchen window, I wondered why I could only see one grey horse. I ran down to the pasture, and was greeted by a very calm Lincoln and Danny & Dakota at the gate. It was then that I could see that the tree had come down. Duke Diesel & Gillette were the only ones brave enough to walk over the electric rope on the ground, laying under the tree's massive limbs, to make their great escape into the woods.
Naturally, our woods are full of trails, which Gillette knows like the back of his hand by now. He must have taken the others here and there, then up to the road on the driveway that parallels our property. Terry, grabbing the tractor to meet me in the back pasture, happened to notice that cars were slowing down and lining up in front of our house. Sure enough, the three greys were at the end of the driveway. Terry ran up there to round them up, and they turned and raced back down the driveway, this time coming through the opening to our property line between us and the neighbor. Before I could get up to the top of the ring (I was trying to put up as much fence as possible to be sure to keep the other three in), Terry had them rounded up and tied to the hitching post. All this in a gusty rain.
One of yesterday's chores was purchasing round bales, and so we took a bale down to Lincoln, Danny & Dakota to keep them occupied while we sawed up the tree. It didn't take us very long, but still it was dark by the time the fence was back up and all six horses were back together again.
In the night, I had dreams of heavy rains and winds, of flooding and washouts, and of my giant horses, defiant and beautiful, racing through it all.
Photos: Top - Terry uses the tractor and a chain saw to remove the large tree from the fence.
Bottom: Two of the run-aways, Duke & Diesel, look as though they know they've been caught!
Posted by Cedar Knoll Farm No comments:

Buzz Cuts for Danny and Dakota 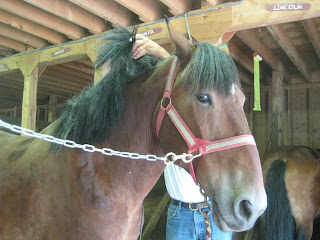 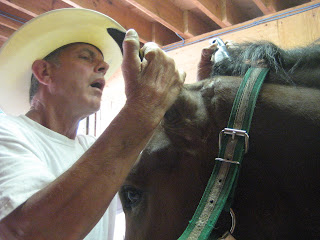 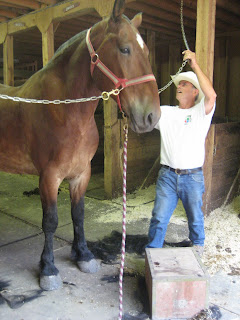 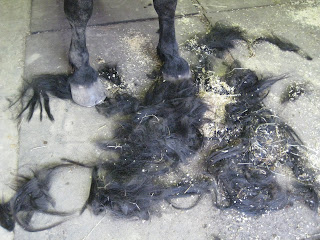 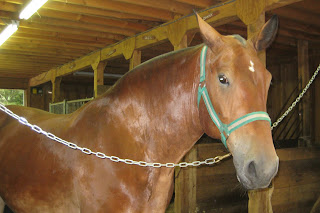 Danny and Dakota, our draft crosses, have always had particularly heavy manes and tails, especially Dakota. I have always been tempted to just shave their manes right off, a good old fashioned work-horse buzz cut. After coming home from wagon rides today, I decided it was time to take out the clippers and just DO IT!
I have no regrets. They look very handsome, especially Danny, whose hefty neck is accentuated by the lack of hair. For those of you who may be cringing - don't worry, it will grow back, and pretty fast, too!
Photos: Top: Dakota, before all the hair was gone.
Two: Danny having his forelock buzzed.
Three: Dakota, clean shaven!
Fourth photo: Danny stands amongst all the hair that fell from his neck and Dakota's. (Remember, these are size 8 draft horse feet!)
Bottom: Danny is especially well suited to the "Work Horse Buzz Cut"
Posted by Cedar Knoll Farm 1 comment: 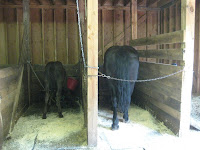 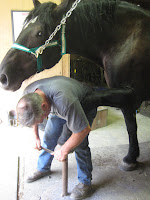 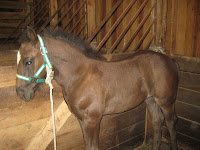 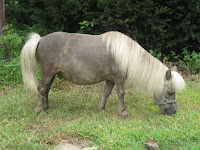 It has been a while since we blogged about Dolly and Leila, for no other reason but that our lives have been very hectic! For those of you who keep asking, Leila is 100% again, after her bout with rotavirus. She is full of energy and growing bigger by the minute. Sunday we had Dolly and Leila in the barn, for a bit of "maintenance". Dolly had her feet trimmed (which have been barefoot since May in anticipation of Leila), and Leila received a lesson in "standing stall procedures". She took to it just fine, learning that Momma would stay near and that, after all the grooming was done, a nibble of grain would be brought to her.
Raj free roams for a good part of the day, like our chickens do. He wanders around the farm yard, eating grass, and checking out the barn floor for loose kernels of corn or speltz. He is fat and rolly polly, and he has a handsome coat on him. He knows he is king! He occupies the roomy box stall. Raj's little stall is now occupied by a a less fortunate one, a little mini colt who looks identical to Raj except that his ribs and backbone and hip bones protrude. Silver is a rescue from some backwoods Amishman, and is being rehabilitated. He is gaining weight, but he remains very distrustful of human touch, cowering when we brush him or snap a lead rope to his halter. But, he knows who feeds him, and he whinnies when we come out to the barn to give him his dengy and hay. He can not be let loose like Raj, as he is, for all intents and purposes, feral. Some day, he will be adopted out to a loving family, but for now he'll stay here till he is good and ready.
Photos: Top: Leila and Dolly get their grain in separate standing stalls.
2. Dolly having her feet trimmed.
3. Leila learns that if she spins around, she can watch mom.
4. Raj is King.
Posted by Cedar Knoll Farm No comments: 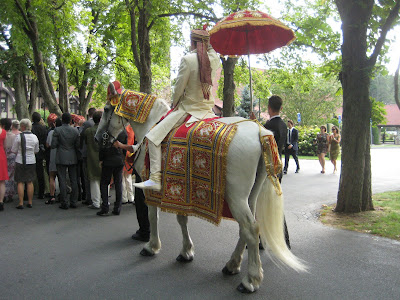 One of our favorite wedding ceremonies is the Baraat, the East Indian tradition of bringing the groom to the bride on a white horse. Gillette is perfect for these Baraats, whether under saddle or on a carriage, as he is completely tolerant of the loud drumming, dancing and crazy fanfare of these colorful and noisy ceremonies.
Be sure to visit our new website for Baraat horses at www.baraathorses.com (click on the blog title for a direct link).
Posted by Cedar Knoll Farm No comments: 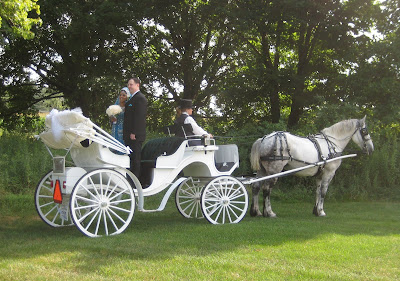 One of the joys of being in the commercial carriage business is being able to participate in some lovely traditions. One of last week's weddings was no exception. The bride, a lovely Pakistani woman, wore a traditional Pakistani wedding dress in turquoise and silver. It was stunning! It also appeared to be very heavy, as I would imagine with all the beaded silver! Lincoln did the honors at this particular wedding, a ride which required a considerable country jaunt for this exceptional horse! Always the gentleman.
Posted by Cedar Knoll Farm 1 comment: 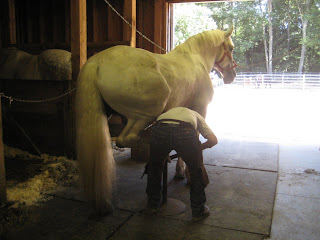 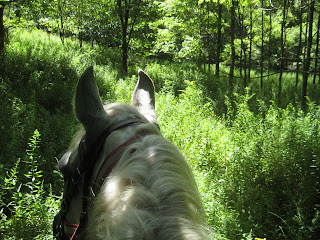 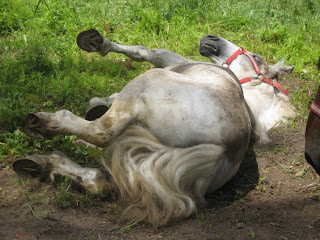 Gillette and I have been doing a lot of riding lately. OK, in truth, Gillette is doing the walking, I am doing the riding. He truly seems to enjoy our time alone together, a new hobby for this 20 year old Percheron, since we have retired him as a commercial carriage horse. We go through the trails with hardly a complaint on his part, with just a loud whinny now and then, calling to the other horses a half hour away in their pasture. Sometimes, so far from home, I think he whinnies just to hear his own voice bounce around through the trees like thunder. His voice is so guttural, and carries like a baritone through an opera house.
Gillette is a trooper. He goes wherever I ask him to, stopping only to peer through the woods at the deer, not paying much mind to the squirrels underfoot. Like a good carriage horse, he trots uphill and eases up on the downslope. He picks his way over rocks quite carefully, but without hesitation. On the way home, he hollers at the other horses as we pass them in their pasture, as they run and buck and snort and carry on. He keeps walking, and would likely walk to the end's of the earth for me if I so wished. Gillette is my definition of a "good horse".
Photos: Top: Terry trimming Gillette's feet on Friday.
Middle: On the trail, we find ourselves in a beautiful stand of Aspen.
Bottom: After unsaddling, what better way to wipe off the sweat than to roll in the dirt?
Posted by Cedar Knoll Farm 3 comments: