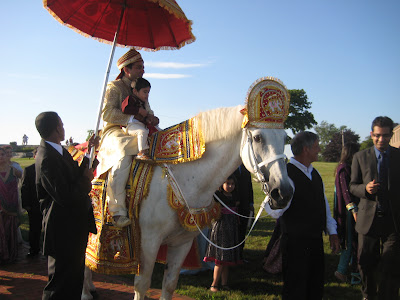 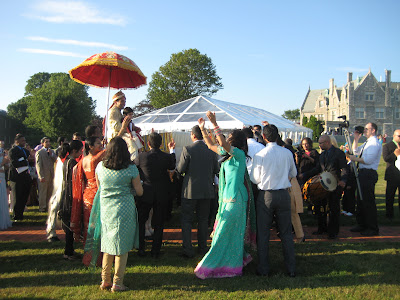 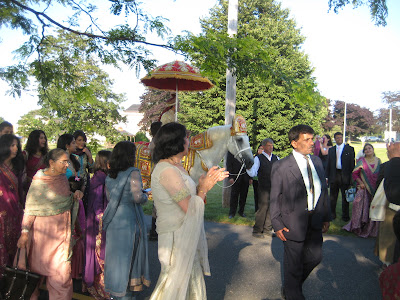 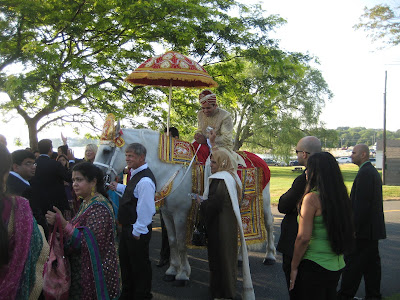 Sunday night topped off an extremely busy four days for us here at Cedar Knoll Farm. This Pakistani Baraat ceremony took place at the Branford House, Avery Point in Groton. This Baraat was particularly high class - with over 400 guests in attendance, the bride and groom made a great effort to impress.
One of the elements of a high end Baraat, of course, is the white horse. Another element is the Dohl player (drummer). According to our Dohl player, Raj Patel from Mansfield, this reception had numerous Hookahs (smoking pipes) set up under the massive tent. He said that was very unusual and only reserved for the higher class weddings. ANOTHER traditional element that we, in particular, adore is the blessing of the Baraat horse money. All the women from the groom's side pass money over the groom's wedding frock, and hand it to the horseman. Just a fancy way for receiving a hefty tip!
Photos: Top: It is an honor to ride the grooms horse, as well as to protect the groom with the umbrella. Here a young relative rides with the groom.
Second: The Dohl player drums frantically in front of Gillette as the guests dance around the groom.
Third: Although most of the groom's people seemed very modern, many women at the wedding wore full veils over their faces.
Fourth: A family member passes money over the groom's frock to bless it for the horseman.
Posted by Cedar Knoll Farm 2 comments:

In the Heat of Summer 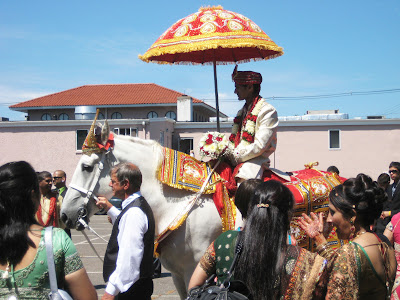 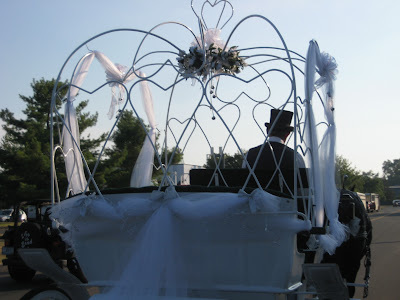 We have had record heat (as so many across the country have also had), but that hasn't stopped us from having one of the busiest weeks of the season. Baraats, weddings, and photo shoots have kept us busy - and sweating! I have to say that the horses have been real troopers, and luckily for us, with the exception of one Baraat, all events have taken place later in the day when the temperatures have (ahem) cooled down a bit. 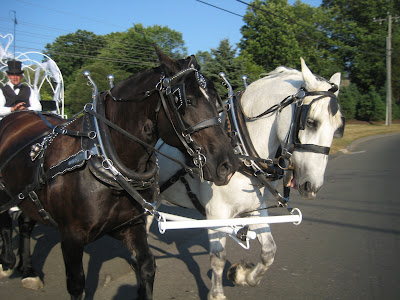 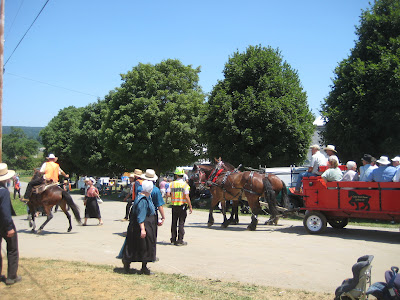 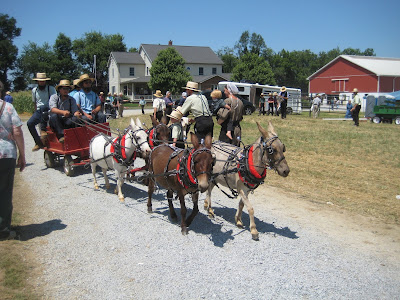 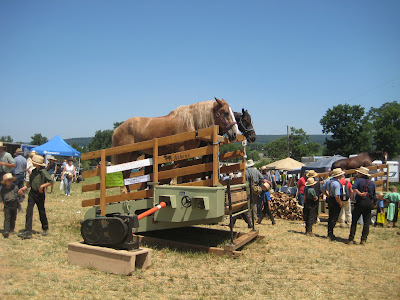 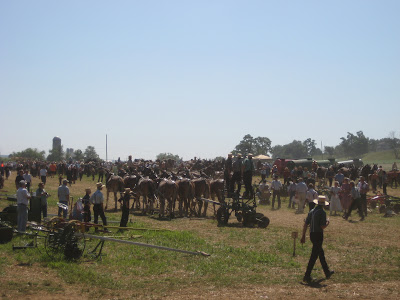 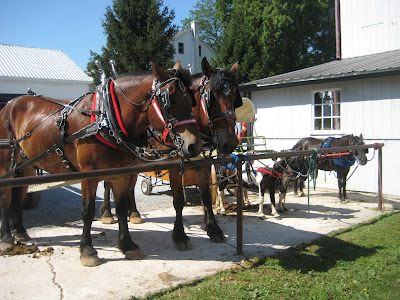 As many of you already know, Cedar Knoll participated in Horse Progress Days this year with Danny & Dakota. We had the dubious job of shuttling visitors (an estimated 16,000+ over the two days!) with nine other teams. Danny & Dakota got one heck of a work out, going from 7am to 6:30 pm (with the appropriate rest breaks, of course). This years HPD event was held in Kinzers, PA at Henry King's massive farm. For those of you who have no idea what Horse Progress Days is, it is an annual event, held in various Amish communities, that can best be described as an Amish trade show. The very latest horse drawn farming equipment is demonstrated for the masses, and approximately 250 vendors set up under the tents and sell their stuff, from equipment to harnesses, furniture to food. What a time!
Photos: Top: Danny & Dakota on our Pioneer Wagon, shuttling people. Cowboy outriders acted as crowd control, when the crowds bothered to be controlled!
Second: "Soda Mules" - a team of four mini mules, selling bottle water and soda.
Third: Horses demonstrating one of numerous treadmills. This particular treadmill operated a well pump - the one behind it powered a log splitter.
Fourth: A mule team of 12, on a four bottom plow.
Bottom: Danny & Dakota resting at the hitching rail, next to a mini Soda Pony and a larger driving pony.
Posted by Cedar Knoll Farm 3 comments: 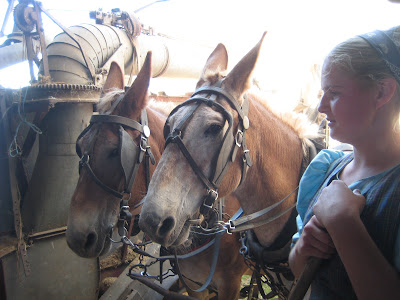 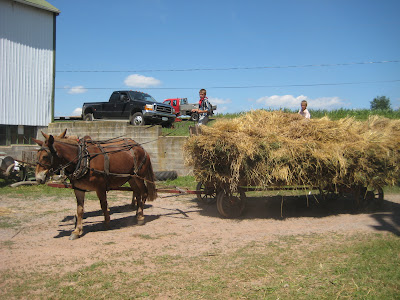 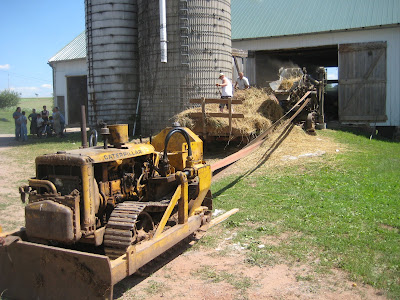 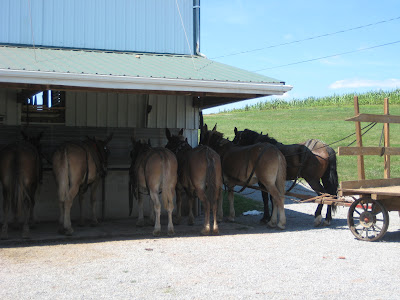 Our journey to Horse Progress Days in Pennsylvania started early, sidelined at our friend Henry's farm to help him with an important summer chore. The family was gathered for thrashing - that is the process of cutting straw, putting it through a thrasher that both releases the speltz off the shaft (used as a grain for feeding the livestock) and bales straw. It is a hot, noisy, dusty, dirty job - one that requires co-operation from human laborers and animal workers alike.
Click on the title of this blog to see a video of this process on Youtube.
The best part of this chore is gathering under the shade trees afterwards, drinking mint iced tea and eating rich chocolate cake and ice cream. Listening to seasoned farmers tell their war stories with mules and work horses, watching the children gallop their ponies through the barnyard. It is a rich life.
Photos: Top: The eldest daughter stands by one of three mule teams, watching the straw come through the thrasher.
Second: Moving the straw along.
Third: One of the young sons bringing another load in on a flat wagon.
Four: Belts powered by the engine of a dozer run the thrasher. The mule team is pulled up right along side this horrendously noisy machine, and stand there while workers unload the straw.
Bottom: The three teams (five mules and a Perch cross) standing at the hitching rail after the job is done, glad to be resting, too.
Posted by Cedar Knoll Farm No comments: