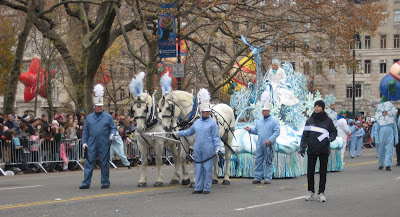 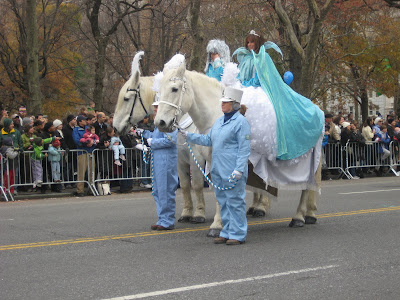 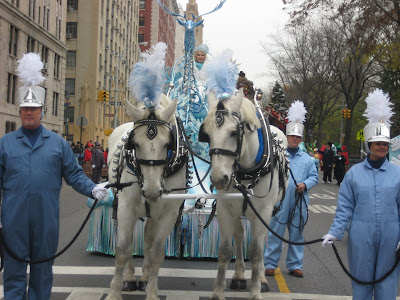 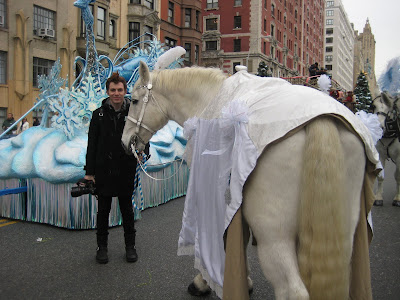 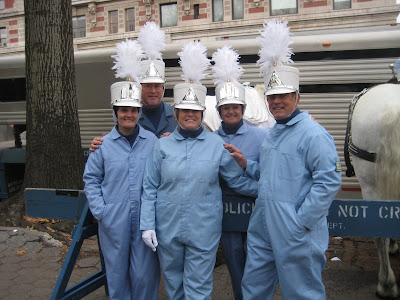 Well, what can we say but "What a great time we had!" Weeks of hard work, including designing horse costumes, negotiating helpers and their costumes, a trip to New Jersey to fit the pole to the float, getting the proper permits for the horses, and the 24 hours of preparation before we even left the barn early Thanksgiving morning all paid off on Thanksgiving Day!
It was astonishing to see how many people lined the streets to watch the Macy's Day Parade in person. I couldn't even begin to guess at how many people were there to watch, but needless to say each side of the street, from 77th Street on down to 34th along the route was literally wall to wall. Everyone was screaming "Melissa! Joan! Melissa! Joan!", as our float unit, The Snow Queen, had Joan Rivers, Melissa Rivers, and Melissa's young son, Cooper.
Although rain threatened, and in spite of the overcast skies, the weather cooperated. Our funny little costumes, blue overalls and fancy feathered hats, covered our many layers and none of us wranglers could complain of the cold at all. It was a different story for Melissa and Joan, however, who, in their own costumes and sitting quietly on Gillette and in the float, didn't move around much to keep warm. Melissa's son, a lovely young boy, chose Charlie, the biggest horse to ride, and had no issue with the chilly weather!
Our float was simply beautiful. Making it's debut this year by Macy's for Universal Studios, it was a mound of "snow" with an ornate sleigh on top, pulled by Duke & Diesel wearing silver sleigh bells and blue ostrich plumes.
We give our greatest thanks to our dearest friends and most trusted helpers that shared the day (and the hard work) with us for the parade: Sue & Karl Lado (wranglers on the float), Darlene Cunnane (wrangler and owner of Charlie, carrying Cooper), Darlene's daughter Nicole (crew), Wes & Linda Hopkins (who stayed with the truck), Linda & Ed Whitford, our barn crew while we were away during the day, and of course, my son Brandon Aviram, who mingled with the press and managed to stay with the parade for its entirety, taking what I imagine will be some extraordinary photos once he has them organized!
Photos: Top: The Snow Queen float
Second: Gillette & Charlie carrying Melissa Rivers and her son
Third: Blue and white everywhere... waiting to start the parade
Fourth: Brandon hanging with Gillette before the start of the parade
Bottom: Our parade wranglers: Darlene, Karl, Elaine, Sue and Terry
Posted by Cedar Knoll Farm