Day before yesterday, Duke lost a front shoe and effectively loosened the other front. Flies are out with this 100 degree weather. The farrier came today and gave Duke new shoes all around, taking off the snow pads and replacing them with leather pads in the fronts. Diesel seems to be holding his well - Matt replaced a few nails for good measure but won't likely re- shoe Diesel for a good week yet.
Dolly, meanwhile, is closer and closer to her due date! The vet was here Wednesday and convinced us she would foal within the week. I am personally laying bets the baby may arrive by Sunday. Call it a woman's intuition.
Stay tuned to our blog to see if it is a colt or a filly!
Posted by Cedar Knoll Farm No comments:

A Day for Winery Tours 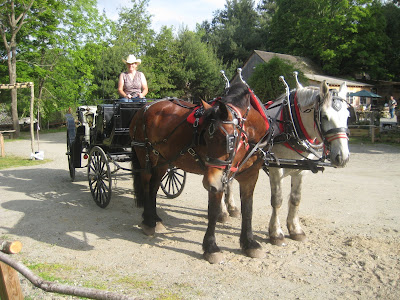 Sunday was a day for horse & carriage winery tours. What a beautiful day it was, too! A bit of a threat from the skies early on, but the sun persevered and the afternoon turned bright and warm. The guests, as we are often inclined to say, were all very nice people.
Dolly has yet to foal. We are patiently waiting. Terry wonders if maybe she just hasn't gained a tremendous amount of weight...of course we know better. The vet will come out this week for a final check-up. Meanwhile, we pace the floor...
Our CT Open House Day, June 12, is shaping up nicely. We will have some surprise guests (yes, Dolly's foal MAY be one of them)...keep watching our blogs and our e-newsletters for updates! We hope you can all join us here! 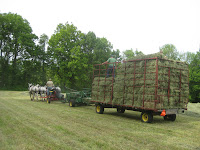 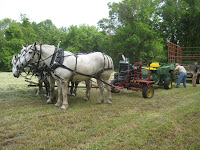 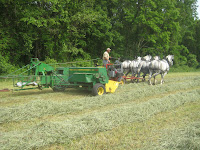 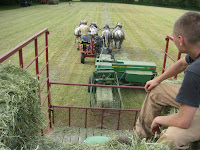 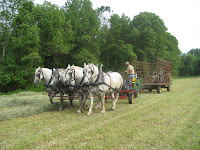 Terry spent the day haying six acres, with horses. These pictures will give you a good idea of what it takes! The forecart is an I&J motorized hydraulic forecart. These fields belong to We Like It Farm in Abington. We now have an exceptional load of first cut, orchard grass hay to feed out.
Posted by Cedar Knoll Farm No comments: 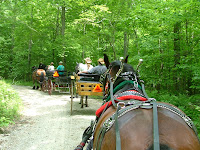 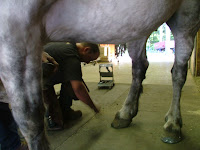 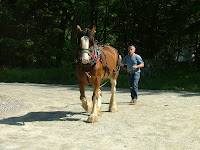 The farrier was here again this week. He gave Lincoln a new set of shoes, but also trimmed two Clydesdales and a pulling pony, which need to go in the stocks. Afterwards, Terry put a harness on the Clydes for the first time (for the first time for the owner, I should say), and proceeded to ground drive them. The one that knows how to drive, was a bit skittish; the own that is not trained to drive, picked it up quickly.
Once Saturday came, I took Danny and my new show cart out with friends in Pachaug State Forest. What a fantastic single horse Danny has turned out to be. Terry, meanwhile, raked and baled hay with horses: more on that in another post.
Photos: Top: From the driver's seat: Danny, friends Linda and Ed with Cyrus, and friends Karl and Sue with Kaleb and Kasey.
Middle: Our farrier Matt Lewis finishing the clinches on Lincoln's hind feet.
Bottom: Terry trying out the Clyde that came for trimming in the stocks.
Posted by Cedar Knoll Farm No comments: 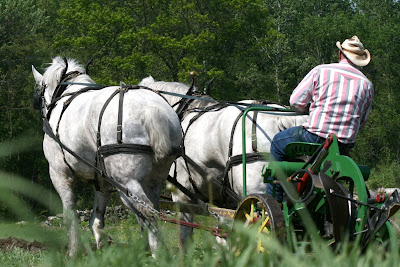 It has been a busy month. Winery tours, carriage rides, an Open House, and plowing. Lots of plowing. Community Gardens are sprouting up everywhere. People want to feel connected to the earth. They want to know where their food comes from and, if possible, get dirt under their nails and grow their own vegetables. Ron Gluck, who feeds many of the elderly in his town; Wilbraham, whose citizens plant three acres of wholesome goodness; and now Lebanon's Community Garden, sponsored by the Indigenous Cultural Education Center.
Lebanon's garden is, to say the least, "special"! What a great group of people organizing it. This is the first time we have been blessed with a gift of thanks that consisted of sage, sweet grass and tobacco, symbolic of the land's Native American roots. Three other teams helped us that day: Karl Lado, Al Cyr, and Red Clements. The garden itself will be remembered for years to come, as the acreage which harbored many hidden dangers. Turning the thick sod on this ground broke many pins (the thick pins which hold the eveners to the plow), tripped moldboards, and bucked plowmen off their plows, bruising bodies but not spirits. Blood dripped into the earth that day, and so it should be. This is how our forefathers struggled. What sustains us should not be taken for granted.
Photo: Terry plowing with Pete & Prince. Thank you for such a lovely photo, Posy Clements.
Posted by Cedar Knoll Farm No comments:

Stumping the Back Pasture 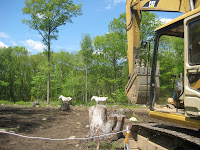 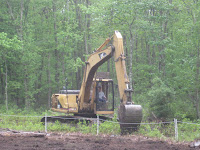 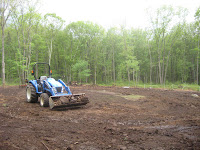 It has been a long time coming, but we have finally gotten an excavator here to stump the back pasture. Now that it has been cleared and extended, we will seed it and have real pasture for the horses. Although still relatively small, it will accommodate a team or two with an alternative to the bare earth paddocks they are currently in, and may even give us room in the winter for sleighing.
Posted by Cedar Knoll Farm 1 comment: 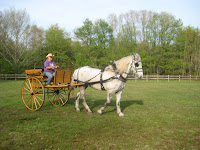 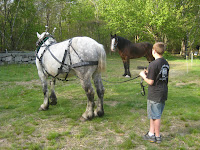 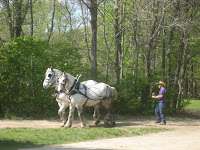 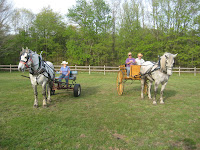 How many of you remember Winter Hill's Cyrus? Our tall (18.1HH) Percheron that habitually ducked under the electric fence last year to make his great escape, only to be distracted by the lawn in our back yard? He is now in the very capable hands of our good friend, Linda, who has very ambitious yet attainable plans to take all the blues in the show ring with him this year. We took Cyrus and Lincoln up to Escoheg over the weekend, to work them together in the vast ring, to begin preparations and conditioning for the show season. While there, we met up with people who have taken driving workshops with us, and their son was given the opportunity to drive Lincoln (who is also one of our lesson horses), again. What a beautiful day. We have high hopes for Cyrus! He has always been such a regal horse!
Photos: Top: Linda and Cyrus, on her new "back-to-back" cart. Second: Young Matt driving Lincoln. Third: Terry ground driving Lincoln (near) and Cyrus. What a huge difference in size! Last: Me with Lincoln (left) and Linda and Ed with Cyrus.
Posted by Cedar Knoll Farm No comments: