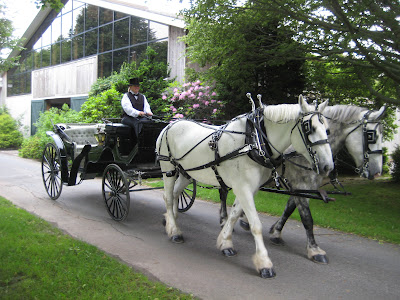 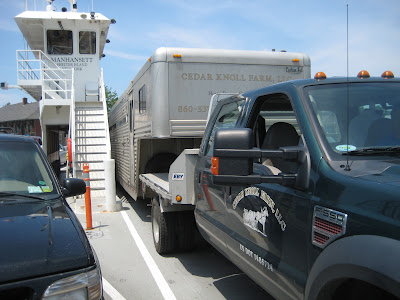 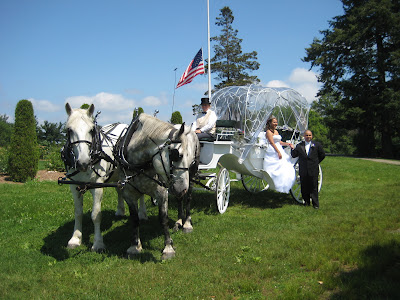 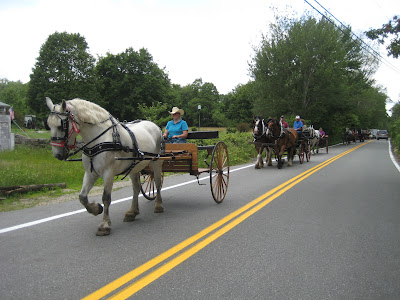 Photos of some recent jobs and activities:
Top: Elaine driving Sam & Cody, a wedding out in the Hamptons of Long Island. The second photo shows us on one of FOUR ferries we needed to take in order to do this very posh wedding in front of over 450 invited guests.
Third photo shows the same team at a Quinceannera with the Cinderella Carriage, at the top of the hill at Walnut Hill Park in New Britain.
Fourth photo - Elaine & Diesel out front in a wagon train through Escoheag, Rhode Island. Diesel, as I have posted before, is now being driven single.
Posted by Cedar Knoll Farm No comments: 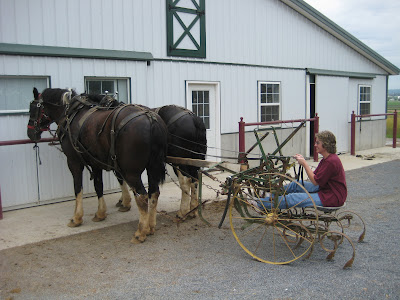 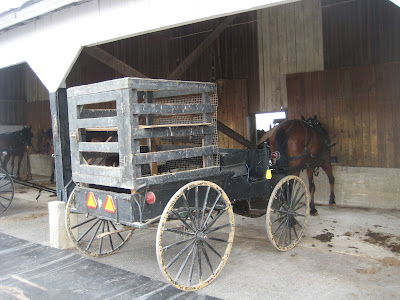 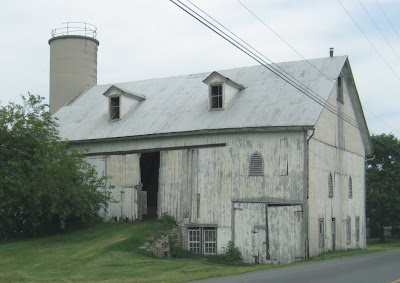 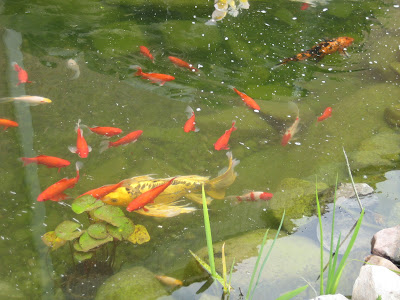 Sometimes, a person must throw down the responsibilities of the Daily Grind and report to the offices of Adventure and Discovery. Monday was such a day for not only me and Terry, but for my cousin Pam, who drove an entire day from Virginia to be with us for a few days, both here at the farm and on a quick trip to Pennsylvania.
A six hour drive in Pam's car (at 33 miles per gallon - pure bliss to our wallets) took us to Pennsylvania Monday, to fetch Pam a teacup (as in Chihuahua). Along the way cousin and I gabbed and giggled, Terry told stories of what to expect in Amishland, and the anticipation of meeting the soon-to-be-named "Boo" kept us preoccupied. Early morning landed us at our friends' farm, Menonites already out with team and cultivator. Pam got a quick lesson about both horses and machinery (top photo).
As a special treat, and since Paul needed to hit the horse auction, we took Pam to the New Holland Sales Barn. While there, she learned how to look for the right horse for a customer, learned to stay away from the hind ends of angry saddle horses, and discovered that Amishmen wear straw hats and Menonite men wear black. She also learned that there is a time to bid higher than you may want (but not by more than $50), and a time to just let the horse go to the next guy. Back in the parking lot, she found it amusing that Amish pick-up trucks could also be equipped with "caps" (second photo).
The day continued with numerous runs to various harness shops, again learning lessons about Amish and Menonite ways. One of our favorite tidbits to be taken home with us came from old man Weaver Aucker: "Horse sense is either born into ya, or it 's not. You just can't learn horse sense".
Since horse sense does not apply to Italians with growling stomaches, we took Pam to Shady Maple for lunch. A well known smorgasbord restaurant to both English and Amish, we ate like true Romans. We were so full afterwards that we welcomed a long drive with Paul to go fetch money on a horse he hadn't been paid for yet. Although we promised to back him up in true mafia style, his gentle Menonite sensibilities caused him to chicken out and let the bearded guy in the straw hat slide with a promise to send a check sometime soon. (Yeh, right - see ya next time, buster).
Then finally, in the late afternoon sunshine, Pam met her sweet little...BOO! I will post pictures of Boo and Pam in the next post to our blog, because he deserves his own portfolio of pictures!
Photos: Top: Pam with Jim & Jess, Paul's spotted team, on the cultivator.
Second: Amish pick up truck waits in the parking lot at the New Holland Sales Barn.
Third: Our teacup man's mules - harnessed and waiting for evening work.
Fourth: Just some old barn, with as much character as the people of Lancaster County.
Last: Outside the Shady Maple restaurant, goldfish in their fish pond surface to greet us. We are certain they must get the leftovers - never seen such giant koi!!!
Posted by Cedar Knoll Farm No comments:

Diesel - the Man is Back! 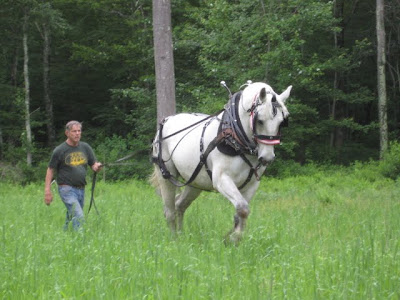 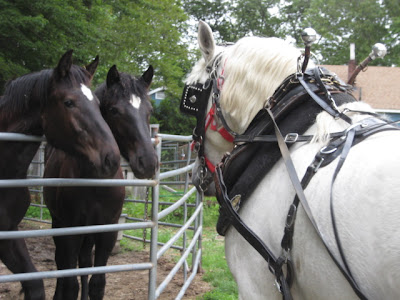 Since we lost Duke on March 12th, Diesel, Duke's half brother and team mate, has been anything but himself. Once the King of Cedar Knoll, Diesel fell back in the herd's pecking order. Although always willing to work, and work hard, he has often been left behind as of late, without his famous half brother to complete the team.
We have, however, started to work him singly. Who would have ever known that the heroic, stoic, and feisty Diesel would make what amounts to a PERFECT single horse?! In the woods, in the field or trotting down the road on a cart, this horse by himself is every bit the horse he was when hooked beside his brother. Only, we still miss Duke.
Posted by Cedar Knoll Farm No comments: 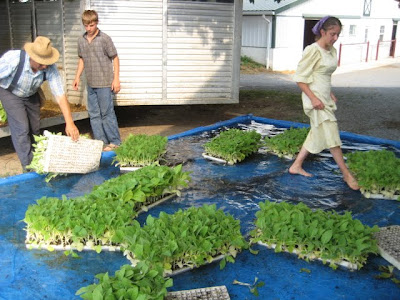 Last week, Terry helped Paul & Mary plant tobacco in Pennsylvania (see my earlier post). Unfortunately, with the extreme heat we had, that planting did not take and the delicate plants shriveled and died. This week, Terry went after another load of tobacco plants for them. The tender plants come in styrofoam packs, and are floated in pools of water until planting time. Planting, growing and harvesting tobacco is a very delicate process, and farmers depend on co-operative weather conditions to see their crops to a healthy fruition.
Posted by Cedar Knoll Farm 1 comment: 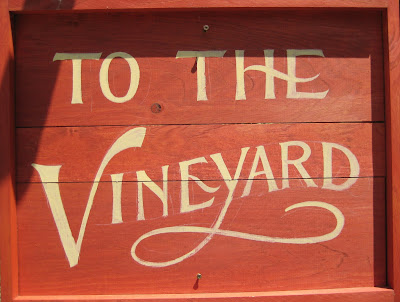 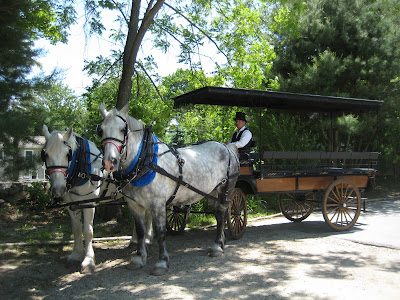 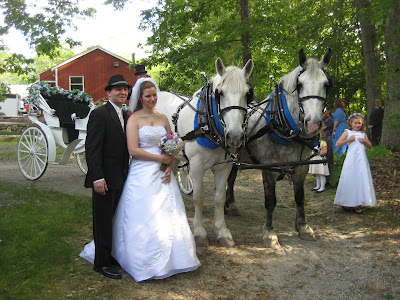 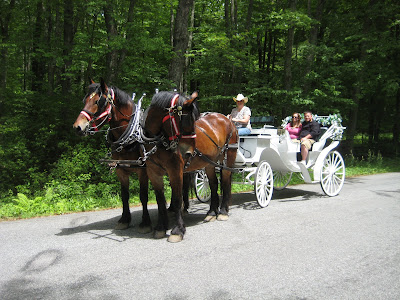 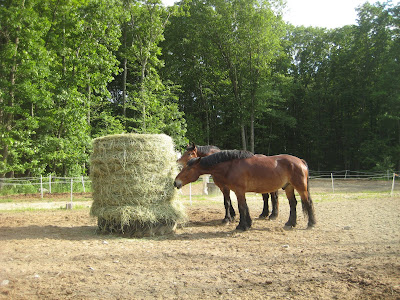 Winery tours, a wedding, a birthday party and country carriage rides filled this exquisite weekend in June! Each moment from sunrise to sunset was enjoyed in glorious sunshine and cool breezes. On Sunday night, the first round bales of the season were placed in the paddocks. As is evident by the picture of Danny and Dakota at their bale, our horses eat well!
Photos: Top: "To the Vineyard" - Saturday had us doing winery tours.
Second: The surrey-top wagonette was in use on Saturday for large groups to the winery.
Third: Saturday night's wedding was held at a local religious retreat. Sam and Cody joined us for a double shift that day!
Fourth: Sunday had us at a birthday party and doing country carriage rides from the farm. Here Danny & Dakota were placed on the white wedding carriage for a newly married couple's carriage ride through the country side.
Last: These round bales, at about 800lbs each, will feed each team for five or six days.
Posted by Cedar Knoll Farm No comments: 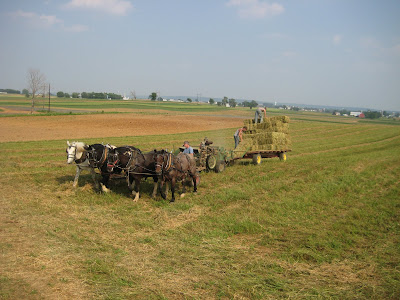 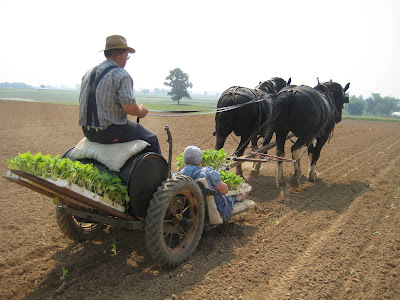 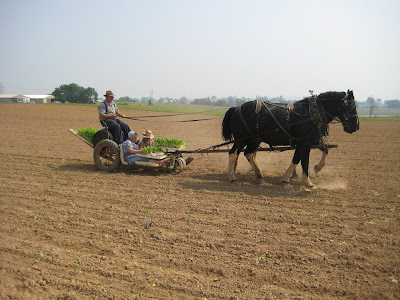 ...do as the Roman's do! This is the motto that Terry lives by, pretty much on a weekly basis. Not a day goes by when in Pennsylvania that his bosom buddy, Paul, doesn't coral him into daily chores on the farm. The thing is, chores here consist not just of feeding livestock, or of moving horses to the sale barn or selling them to Amish half the state away; it is plowing, discing, harrowing, mowing, planting, baling, harvesting, putting up tobacco, baling tobacco, picking pumpkins, etc, etc. Earlier this week, he baled hay and planted tobacco. All, naturally, by horse power.
Photos: Top: Terry takes the reins and bales the alfalfa fields. The counter read 430 bales at the end of the day. Paul's sons Timmy and Wesley stack the bales on the hay wagon.
Middle: The tobacco "planters" separate the plants, place the plant in the mechanism at the center of the planter, and the mechanism plants the tobacco in the harrowed ground! The driver sits atop a water barrel which continuously waters the newly planted tobacco.
Bottom: Tobacco planting is a three person job.
Posted by Cedar Knoll Farm No comments: