Sunday at the Farm 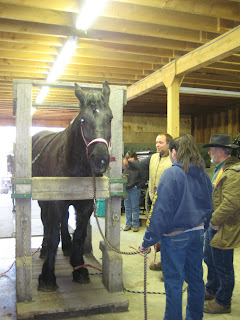 No rides today, but our farrier is here to shoe not our horses, but horses belonging to other people. Our stocks prove handy when a horse isn't accustomed (or willing) to picking up their feet and hold them up for the farrier.
Terry says that at one point we had four trucks and trailers here - horses going in the stocks, horses being fitted for harnesses, sale horse being tried out. Later in the day Terry and I took three of our carriages up the road to our new storage garage - so far there are six carriages, wagons and sleighs up there, and room for at least that many more. Our plan is to finally complete the wash bay in the barn (where our surrey-top wagonette occupied the space for years now) and build more stalls.
Posted by Cedar Knoll Farm No comments: 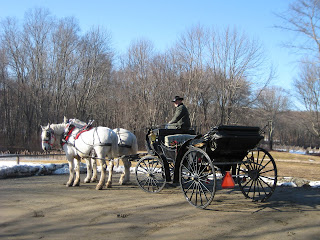 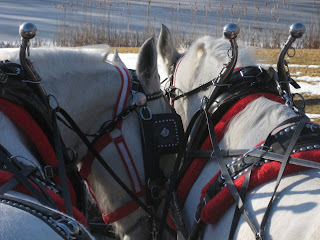 Winery tours again today. It was a beautiful day, warm and idyllic. Duke & Diesel did the honors again, simply because they remain clean under their blankets. Danny & Dakota, quite frankly, are looking like little piggies. Dolly is getting bigger and bigger by the day, and showing signs of being a temperamental momma - she lifted her leg at the vet yesterday while he checked her belly for signs of a second heartbeat. Gillette somehow lost his blanket in the middle of the night, and now sports a new, cleaner one. Lincoln waits his turn to be the "single" horse on a job somewhere. Meanwhile, we are booking our new Cinderella Carriage (4 bookings as of 10PM tonight) before it even comes home. We are gratefully renting a large garage at a neighbor's stable just down the road now, where most of our carriages and sleighs will be kept. It is necessary as we have run out of room here at the farm.
Posted by Cedar Knoll Farm No comments: 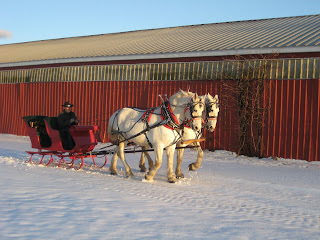 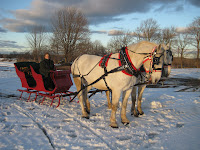 Yesterday was a gorgeous, warm day - above 40 degrees! Unfortunately, our sleigh rides did not fair well - the snow conditions had deteriorated so badly that by sunset the trails were rough and muddy. Complimentary gift certificates were given out towards another sleigh or carriage ride - we would never want our customers to be disappointed. The evening sure made for beautiful pictures, though!
Hay Diary - Yesterday, two round bales were set in the paddocks. Since Dolly has been separated from Danny & Dakota for the safety of her unborn foal, it will be interesting to see how long Danny & Dakota's bale lasts, compared to the four grays.
Posted by Cedar Knoll Farm 1 comment:

Valentine's Day weekend turned out to be very hectic. Friday and Saturday brought us winery tours, while Sunday we were at one of our favorite venues, Saybrook Point Inn. Met a lot of nice people, even friended a few on Face Book since. In spite of our best efforts to hold sleigh rides, the meager snow fall we had last week did not amount to anything and by Friday, sleigh conditions were zilch. Tonight we anticipate more snow, but it is doubtful we will get enough for sleigh rides still. We will see. It has been an odd winter.
Terry took off to New York City again today, picking up a carriage we will sell. It was a quick run and he was back in time to open the harness shop and greet customers. I stayed home to help my daughter with an art project, and to work on a website I am designing. Our work is never done.
Photos: Top: Winery Tours Friday & Saturday
Middle: Romance at Saybrook Point Inn
Bottom: Ledger and Penny, relaxing as usual. 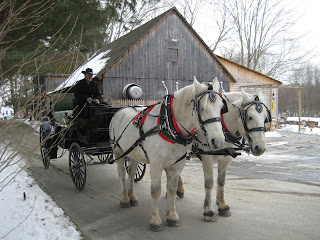 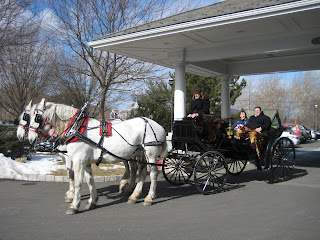 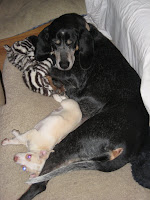 Matt, our farrier, came by yesterday to shoe Duke & Diesel. Although their feet weren't particularly long, it was time to do some maintenance on them to prevent any problems. Matt says they are doing much better, their feet are improving (especially Duke's) and the DL Methianine seems to be helping. Diesel still needs a bit of epoxy, but nothing like it was this past summer. Of course the true test will be to see what happens this summer, when a year's worth of hoof will be done growing.
Matt finished the team just in time for us to get them harnessed and hooked to a vis-a-vis for a winery tour. As usual, this very nice couple (all the way from Scarsdale, NY) had a fantastic time. Although we had advertised for sleigh rides, Wednesday's snow storm proved to be wimpy and only dropped a couple of inches, which melted quickly. Yes, there is still snow on the ground, but it is a thin layer and not suited to good sleighing. Winery tours are a great alternative - and so starts a very, very busy holiday/Valentine's weekend!
Posted by Cedar Knoll Farm No comments:

A Busy Week, Filming and Rides 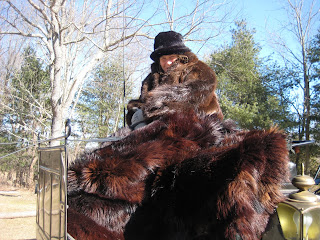 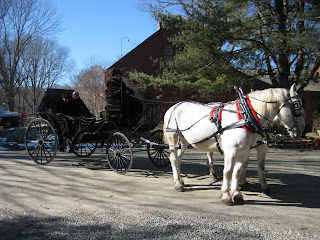 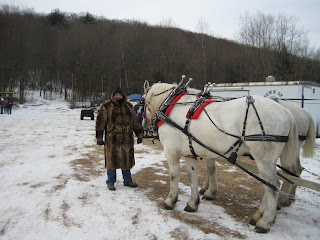 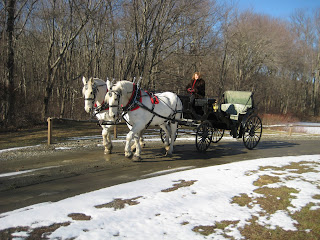 Cedar Knoll Farm has been busy this past week! The first half of the week was spent preparing for camera crews to arrive on Thursday, and once here, they spent the day filming and interviewing us for a special series on CPTV. The series, which focuses on people who "make their passion their living", is scheduled to begin on March 25. We have been very excited about this wonderful opportunity, and can't wait to see the end result! We will announce the specific dates and times our segment is scheduled once we get the final word. Keep checking back for updates.
Saturday was the Wilbraham Sleigh Rally in MA. We were hired to do the commercial sleigh rides for the spectators, but, because of the lack of snow cover, substituted the wagon instead. As a matter of fact, the town had to truck in snow for the ring for the competitors. It was a cold, but wonderful day, and we did quite well.
Sunday was winery tours and a proposal! Not surprisingly, the answer was YES! Congratulations to Bill and Jennifer!
Hay Diary - By Friday morning, these new round bales were all gone. We are disappointed they didn't last longer. Pound for pound they have been the most expensive round bales so far. We continue to feed out square bales until Terry comes back from PA, at least.
Photos: Top: Sunday at the winery was COLD!
Second: Congratulations to Bill and Jennifer on their engagement.
Third: Our friend Andrew (who bought Annie from us), showed up at the sleigh rally and helped us out.
Bottom: Filming on Thursday included our carriage rides to the winery.
Posted by Cedar Knoll Farm 1 comment: 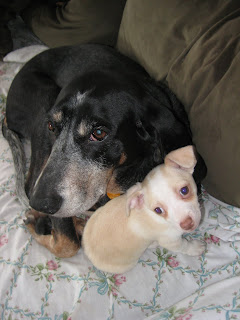 We have been crazy busy here, cleaning and making upgrades to the barn and working in the harness shop. A dusting of snow this morning melted everywhere by 10:00AM - except here! Our yard is covered in white.
Temperatures have been fluctuating, but getting above freezing during the day. Our wood stove keeps the house cozy warm. Our dogs and cat seem to benefit the most, since we spend so much time outdoors with the horses. We feel fortunate, and our good fortune trickles down to our house pets, who enjoy the couch by the fire, day in and day out!
Photo: Penny & Ledger, cuddling together on the couch.
Hay Diary: We put out two new round bales today, after having to feed out square bales last night and this morning. The round bales are from a different farm (New York) and are considerably smaller than the ones we have been using. It will be interesting to see how long these last.
Posted by Cedar Knoll Farm No comments:

When a Child Leaves the Farm 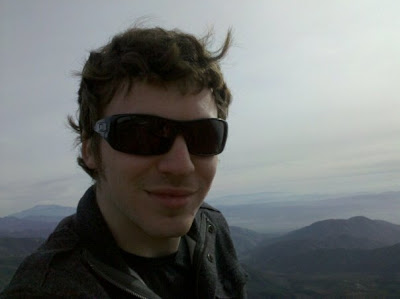 We love the farming life. It is, more often than not, a hard life, but gratifying work. My son Brandon, on the cusp of 21, willingly helped out when asked to as he was growing up - putting up hay, going on weddings and hay rides, cleaning the barn - but his heart was always in the city, and the creativity it fosters.
Now three years a resident of Manhattan, he is coming into his own. I have pictures of him as a baby, maybe two or three years old, sucking his thumb and holding his blankie, at my first Mac computer, a Quadra 800. By the time he was in Junior High, he had his second Mac, a MacBook Pro. Photoshop became his favorite program, because with it he could create magic, editing his photographs. Funny, I don't remember his first camera - but he likely caught the shutterbug while borrowing mine. Almost two decades since that baby picture of him at my Quadra, I have jpgs of him on my computer, curious self portraits and fabulous shots taken by his many photographer friends. His own sharp compositions, almost always figurative, illustrate the world my son inhabits with glass, concrete and graffiti, the Brooklyn Bridge, Central Park, and strange, foreboding lofts with peeling paint and steam radiators. He is immersing himself in the BIZ, photographing fashion models, ballet dancers, and rock stars (Katie Perry is one example). He is following his dream, and making it real. Now he is in L.A. for a bit, filming a music video for VersaEmerge, and going to Grammy parties with the likes of Green Day and Jason Mraz. I always knew this little rooster would fly the coop - but who knew he would do so well so fast? Maybe I should have kicked his little butt off the farm even sooner...
Photos: Top: Self Portrait of Brandon with his iPhone, at the top of the world.
Bottom: Brandon at the Brooklyn Bridge, photo by his friend Insuh.
See some Brandon's work by visiting his websites (be sure to follow up with links to his Flikr page):
http://www.sophisticateddecadence.com
http://www.redlabelphotography.com 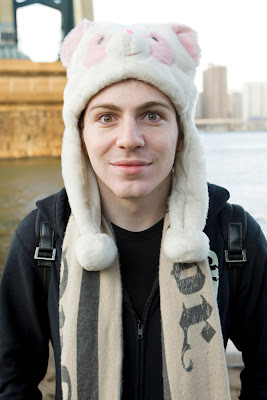