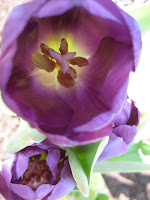 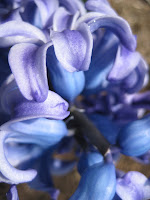 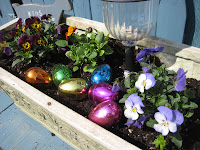 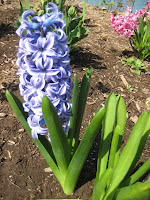 Because Their Beauty is Fleeting... 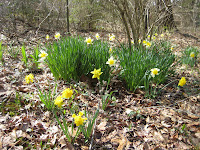 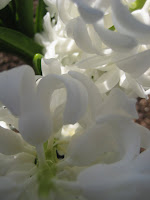 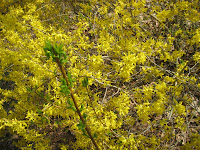 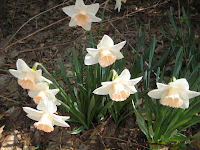 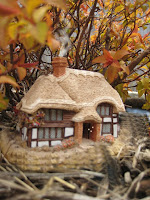 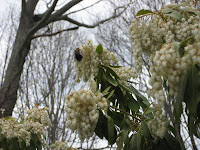 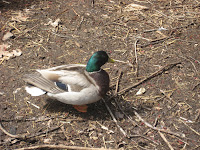 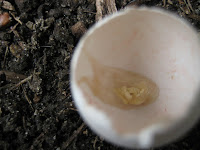 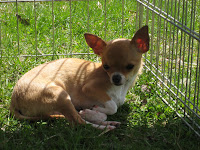 Since we celebrated Easter on Saturday to accommodate the schedules of our (somewhat) adult children, Easter Sunday became a day of tremendous "rebirth" at the farm. Terry spent the entire day york raking the three paddocks, which required downing fences and putting them back up again. I spent a good portion of the day in the flower gardens, planting & pruning. The gold-fish pond, still in need of a good cleaning (it has rained numerous times since we pumped it, after all, and leaves blew in again), had me moving very heavy, flat rocks to build the waterfall. I am itching to get the pump working, and to fill it with orange, yellow, and silver beauties. The fence in this garden needed some repairs, and I spent the time to do this, too.
The animals, on the other hand, all had a very relaxing day. The horses had the day off, and stood chewing hay and shaking against May flies, as they watched Terry work in their paddocks. The peafowl and ducks somehow managed to get out of their protective condo into the wild blue yonder of the chicken run, and I'll be darned if we'll ever get them back to where they belong! Here's hoping they don't fly the chicken coop - they'll make a mess in the barn and gardens if they do!
Photos: Top: Getting the idea from a very creative friend (Gypsy Mare Studios), I searched my garden to see if there may be a fairy house hidden somewhere. One was found hidden under a bright orange bush, near the goldfish pond! Smoke from the chimney told me its inhabitants were very close by...
Second: Busy Bumble Bee
Third: The Mallard duck in the chicken run. His mate is sitting on eggs...will we have ducklings soon?
Fourth: A recently hatched bird egg, found in the pond garden.
Fifth: On a warm sunny day, Simba keeps me company while I work in the gardens. Because of his tiny size, however, he must remain protected from the numerous hawks that hunt our property.
Posted by Cedar Knoll Farm 2 comments: 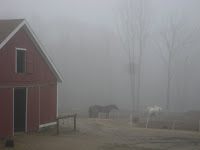 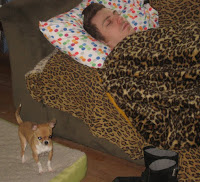 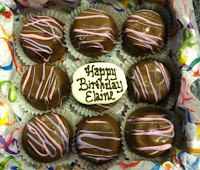 Happy Easter everyone! Although the day isn't dawning bright and beautiful here at Cedar Knoll Farm weather wise, it is warm and almost balmy. The view from the house out to the barn reveals horses in fog, muddy and dirty from yesterday's rain. Our son, Brandon, is home from the Big Apple, and sleeps soundly on the couch as I write this. Friday was Earth Day, Good Friday, and my birthday all rolled into one. I find it most appropriate that I share my birthday with Earth Day each year! Had the gift of family (Brandon included), a friend's delicious "funny bone" upside down cupcakes, and the beautiful gift of viewing "Water for Elephants" with Maegan and my family for my birthday. HIGHLY recommend this movie, which takes place during the depression and revolves around the circus and its magnificent animals, and equally magnificent human characters!
Have been working Diesel single this past week. I love this horse. I often wonder if he still misses his brother. I would venture to guess that he dreams of him in the night. The work does Diesel good. This is evident in his posture, in his eye, in his attitude as he stands for harnessing and as he goes down the street. The dynamics of the herd has changed. Diesel, Dolly & Gillette are separated from Danny & Dakota now, for safety sake. Dolly was once the low-man on the totem pole. Now she rules the roost, henpecking the two boys. She chases Diesel at feed time. Gillette chases her. Diesel chases Gillette. Around and around they go, looking for the herd's anchor that was once Duke.
Photo: Top: The view from our house this Easter morning.
Middle: The New Yorker sleeps through all kinds of noise and commotion, including the antics of a tiny Chihuahua.
Bottom: My birthday "Funny Bones" from my friend Erin's Chocolate Rose Bakery in Plainfield, CT.
Posted by Cedar Knoll Farm No comments:

When Blessings Are Counted

Last night put everything into perspective for a lot of people in our Lisbon neighborhood. I was just finishing up feeding the horses at around 7PM, when I looked past them to the woods behind us and saw flames. A call to 911 as the sirens went off in town confirmed that it had already been reported, and I watched in horror as the flames completely engulfed our neighbor's log cabin abutting the back portion of our property. Terry, on his way back from Pennsylvania, was called and diverted through the back roads in order to get home, as Kimball Road was justifiably closed to traffic. He took the Occum exit instead of our own, and said he could see the flames from there. Another friend and horse farm in the neighborhood with fire ponds saw five tankers going back and forth all night to load on water, and a "pool" was set up in the middle of Kimball Road to usher water to the house at the end of the lane. I, personally, have never seen anything like it. At least five surrounding fire stations came to the rescue last night, and managed to contain this colossal fire to the house and not the neighboring homes or woods. The house was burned to the ground. Our neighbors, who were home as the fire started (it is currently presumed to have been started in their chimney) made it out physically unscathed, however. A BIG blessing in the face of such a big loss.
Photo: From the Norwich Bulletin - Click on the title of this blog to read the article in he April 20, 2011 edition of The Bulletin.
Posted by Cedar Knoll Farm No comments:

Spring on the Farm 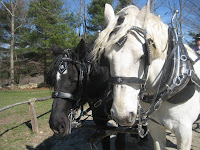 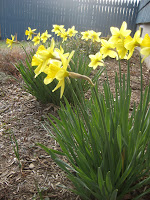 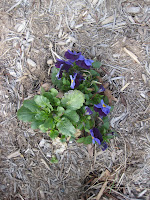 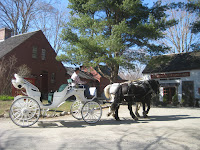 Winter snows are long gone and flowers are popping up all over the place here on our farm. Well established daffodils are opening bright and beautiful in our flower gardens, on the lawn, in the woods, and from under the wood pile. Johnny Jump-ups are sprouting up in unsuspecting places, too! Our ornamental gold-fish pond has been emptied and cleaned out, and we will be building a waterfall shortly to aerate it better this year. Our vegetable garden has been cleaned and prepped for May planting. Winery tours are picking up again - who wouldn't want to take a carriage ride to the winery and sit in the sun, sipping wine? Spring really does give us a sense of hope after a long hard winter. It always comes back to us, no matter what.
Posted by Cedar Knoll Farm No comments: 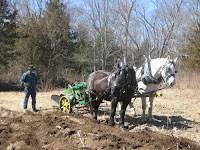 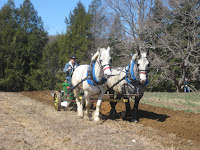 The first day of April has come and gone and so has our first day of plowing. Plowing Ron Gluck's two acre garden in Hampton is our first plow job of the Spring each year here in Connecticut (Terry has already been plowing and disking fields in Pennsylvania).
With Duke gone, Diesel's new partner is Dolly. Although she had been on "maternity leave" for most of last year, Dolly stepped right into the work force again and made a strong work partner for Diesel. The new team, Sam & Cody, was also put to the test for the first time since we brought them home, and they passed it with flying colors. They have certainly been eager and able to pull the hydraulic plow as if they hadn't had the "easy life" at a riding stable for the past few years. With us, these horses will work, but it it obvious that they will fall right in to "The Draft Horse Way of Life" quite willingly.
Photos: Top: Terry gets off the plow to let Dolly and Diesel rest after a few passes in the lower garden. The soil in this area has not been turned over as often as the top garden acreage and was considerably tougher going on horses, man and plow.
Bottom: Cedar Knoll's new team of Percherons, Cody & Sam, took to the hydraulic plow like they've been at it for years. It is the mark of a good team that can be put to farm machinery, carriage, saddle, and machinery again as if one and all were the same. Cedar Knoll is proud to have this team as our newest addition to our "draft horse family".
Posted by Cedar Knoll Farm 1 comment: 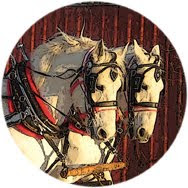 For those of you who follow my personal page on Facebook, or for those of you who would like to connect with us on Facebook, we now have a farm page! Be sure to "like" us there to keep up with the latest farm news, photos, and videos! Clicking on the title of this blog will bring you directly to our page, or copy/paste this url into your browser:
http://www.facebook.com/pages/Cedar-Knoll-Draft-Horses/120054141402917?sk=info
Hope to see you all there!
Posted by Cedar Knoll Farm No comments: 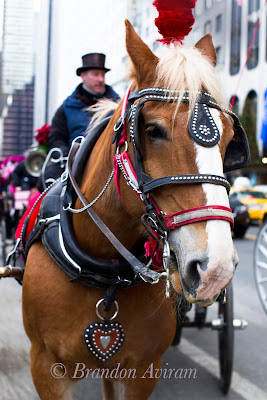 So much has occupied our time, our minds, and our hearts here at Cedar Knoll that I neglected to let you all know of some new articles I've written and had published lately. The one that is most near and dear to my heart just came out in the Draft Horse Journal (Spring 2011), and is called "Carriage Horse Controversy: A Modern Day Dilemma". In this article I look into what animal rights activists are trying to do the industry - that is, to put an end to it. Beautiful photographs of the horses illustrate the article and were taken by my son, Brandon. Follow this link to read the article: http://www.cedarknoll.net/DHJCarriage.pdf.
The second article appeared in the Spring 2011 edition of Farming Magazine, called "Spring Plowing in New England". It is an article about the annual "April Fool's Plow Event" held locally here in Connecticut, where many of us horse farmers help a gentleman plow his two acre garden with horses and oxen. The garden yields an abundance of food that he then offers to the needy in his community. You can learn more about this charming magazine, with a large following of Amish and Menonite readers, at www.farmingmagazine.net.
Photo: Top: One of Central Park's carriage horses, owned by Stephen Malone. Photo: Brandon Aviram
Posted by Cedar Knoll Farm No comments: