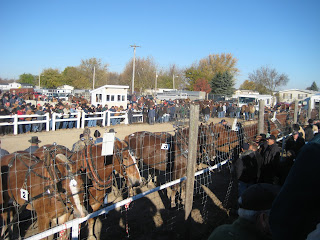 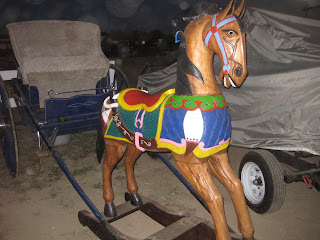 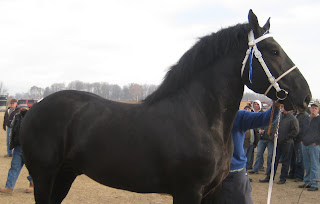 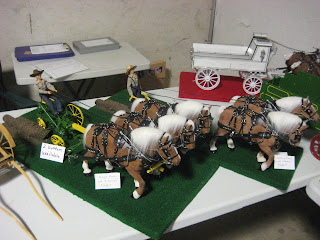 Terry got home this morning after a 16 hour drive from the Topeka sales. He and friend Roger took off together in the wee hours of Monday morning, driving straight through. The auction, according to Terry, was a "good time", with many fancy horses and quiet work teams, very large pulling teams, great bargains on some nice carriages and unbelievably high prices on the toys.
The first day was spent trying to buy carriages, only to decide that there simply wasn't room in Roger's trailer to bring back horses AND carriages. A commercial hearse came up on the block, and sold for a price too embarrassingly low to even mention here. Terry, almost throwing up his hand, decided at the last minute that he didn't want to have to come all the way back to Topeka to pick it up with the tractor trailer. Roger, on the other hand, found the horse of his dreams - made of wood! Into the trailer Woody went.
The next morning the pulling teams were pulled for all to see their abilities. Then into the ring they went for the auctioneer to rattle over. The very first pulling team, Belgians weighing in at better than 5700 lbs and standing nearly 20 HH (yes, I said TWENTY HANDS HIGH), heard the gavel slam down at $52,000.00 (yes, that's FIFTY TWO THOUSAND DOLLARS). Unreal. They were the top selling team all week.
Terry and Roger bid on incidentals and purchased sundries from the many vendors that set up shop at most horse auctions. Things like boxes of horse shoe nails, winter stable blankets, and other items that just can't be found at decent prices here in Connecticut were stored in the truck. Teams were bid on, and lost to the inability to justify their prices. Horses were looked at, and lost to ridiculously low prices because they didn't react fast enough. Amish were there, Menonites, wealthy show folks, common horse farmers. And kill buyers. Terry's at auction every other week, somewhere, and easily recognizes them. This time, it was the Japanese. Such a blister on the heart to think of the fate of some of the nicest looking horses there.
With the rocking horse and other items loaded into the trailer, Terry and Roger took off for Connecticut on Wednesday night. Driving straight through yet again, they arrived home this morning, exhausted, but happy to have spent "a good time" together.
Photos:Top: The line-up of Pulling Teams.
Second: Just the right size, and such an easy keeper, too: Woody, the wooden rocking horse.
Third: A nice looking Percheron stud.
Bottom: Some of the hand-made models went for two and three times what many REAL horses sold for.
Posted by Cedar Knoll Farm